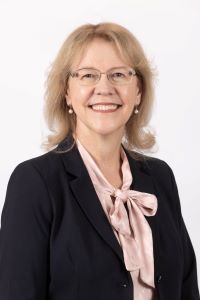 I am humbled and honored to receive this award, and I accept it with heartfelt gratitude to the many students and mentors I have had the immense privilege to work with throughout my career. Plutarch beautifully compared the mind to “a flame to be kindled” rather than “a vessel to be filled”; if I have been able to stoke that fire for others, I have been reciprocally ignited and inspired, and I remain steadfast in my commitment to fostering diversity and compassion through mentorship.

Minerva Cordero is a professor of mathematics and the Senior Associate Dean of Science at the University of Texas (UT) at Arlington. She joined UT Arlington in 2001. Throughout her 30-year career in academia, she has mentored students of diverse ages and backgrounds ranging from kindergarten to junior faculty and early-career scientists and engineers, devoting special attention to increasing the participation, visibility, and success of individuals from populations underrepresented in STEM fields, including women and the Hispanic and Black communities. Minerva has promoted mentorship in several capacities at the national level, including as Governor for Minority Affairs of the Mathematical Association of America, as Chair of the Committee for Minority Participation in Mathematics, and as Chair of the Human Resource Advisory Committee of the Mathematical Sciences Research Institute. Throughout these positions, she worked diligently to increase awareness of the value of diversity in the mathematics community and ensure that all programs feature a significant mentoring component. For her mentoring efforts and her dedication to the advancement of students from underrepresented populations in STEM, she has received several awards, including an American Association for the Advancement of Science IF/THEN Ambassadorship; Ford Legendary Women Award; Great Minds in STEM Hispanic Engineer National Achievement Awards Corporation Award for "Education Distinction;” and the Outstanding Student Organization Advisor Award at UT Arlington. Minerva holds three degrees in mathematics: a B.S. from the University of Puerto Rico; an M.A. from the University of California, Berkeley; and a Ph.D. from the University of Iowa.